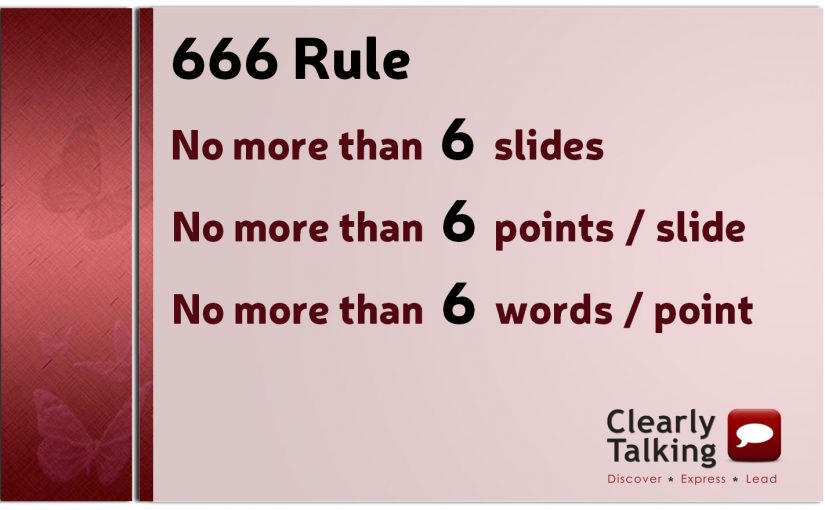 Hands up if you’ve ever suffered from death by PowerPoint at some time in your life. Most of us have experienced this. You go to a seminar or presentation and it’s like looking at Aunty Betty’s holiday snaps: lots of trivial detail about people you’ve never heard of and places you’d rather not go to.

You should regard reading from your slide set as a cardinal sin. For one thing it insults your audience’s intelligence – most of them can hear you and don’t need to see it as well. More importantly, you’ll challenge even the most eagle-eyed person’s visual acuity, especially of they’re sitting any further away that the first one or two rows.

(When I was at uni in the 1990s, one lecturer used to display his undergraduate notes on the screen and read them out verbatim. He wouldn’t take questions and he had the most boring monotonous voice you could imagine!)

The other thing about reading your slides is that you will lose vocal tone and variety. Unless you’ve learnt how to read scripts live, it’s a big no-no.

✖   Don’t turn your back on the audience

The trouble with complicated PowerPoint slides is that you’re often tempted to turn your back on the audience to point out some interesting feature. Doing so breaks the rapport that you’ve built up with the audience – it’s like snapping a twig. Suddenly you’ve become of the audience instead of the speaker and you lose most of your body language expression.

✖   Don’t make them too complicated

I’ve lost count of how many times people bring me PowerPoint slide sets that number 40 or more. The look on their faces is predictable when I tell them that they’ve got to cut out the majority of them – disbelief, horror, despair… There are major problems keeping track of where you are with so many slides.

You could even induce epilepsy in the audience or repetitive strain injury in yourself from so much button clicking (just joking!)

Continuing from the last point, it’s always best to keep it simple, particularly if you’re not a seasoned presenter. Technology has a habit of obeying Murphy’s Law – if it can go wrong, it will!

Make sure that your points fill the PowerPoint slides and you use the biggest font size possible so that people sitting at the back will have no problems seeing them.

Better still, keep it to a single point and a nice picture.

✔   Do use them for things that are hard to explain

PowerPoint Slides are brilliant for displaying things that are hard to explain in mere words, such as financial and statistical data.

Rather than spend hours going through something difficult to explain, why not show a photo of it or convert data into a graph, pie chart of info-graphic.

✔   Do remember that you are the presenter

When all is said and done on the subject of presenting beautiful PowerPoint presentation slides, they are just aids. They are not the presentation – you are. Slides can be a distraction, not just for the audience but for you, because they take you away from creating solid content.

People haven’t come to watch a slide show; they have come to see you.

If you want to learn how to be a better presenter, join one of our Seven Secrets workshops or come along to our regular monthly speakers forum. See you there!